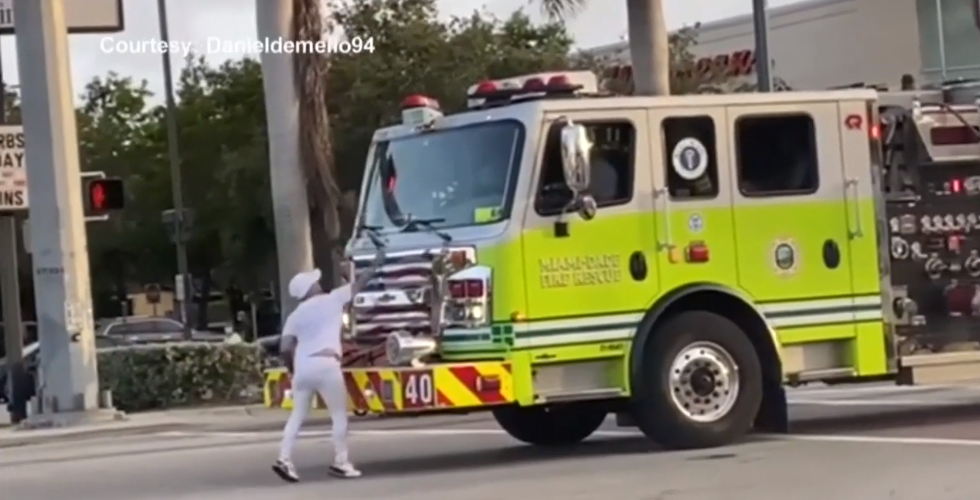 MIAMI-DADE COUNTY, Fla. – A man was taken away in handcuffs after getting into a dangerous altercation with a Miami-Dade Fire Rescue crew, and it was all caught on camera.

The incident occurred Sunday afternoon at the intersection of Southwest Eighth Street and 42nd Avenue.

Cellphone video shows a man dressed all in white striking the front windshield of a Miami-Dade Fire Rescue truck with a baseball bat, cracking the glass and causing about $4,000 in damage.

It doesn’t appear that anyone inside the fire truck was injured.

A Coral Gables police officer arrived at the scene first and took the man into custody, however the incident is being investigated by the Miami-Dade Police Department.

The suspect was identified Monday as 30-year-old Jesus Santana-Jardines. It’s still unclear why he became upset with the firefighters.

According to his arrest report, Santana-Jardines continued to be combative on the way to jail and told the officer “he would not be going to jail and to stop the vehicle.”

“As I proceeded to TGK, the defendant began to kick the rear driver-side door/window in attempts to escape the marked patrol vehicle,” the officer wrote in the arrest report.

Police said a bag of cocaine was also found in the suspect’s vehicle.