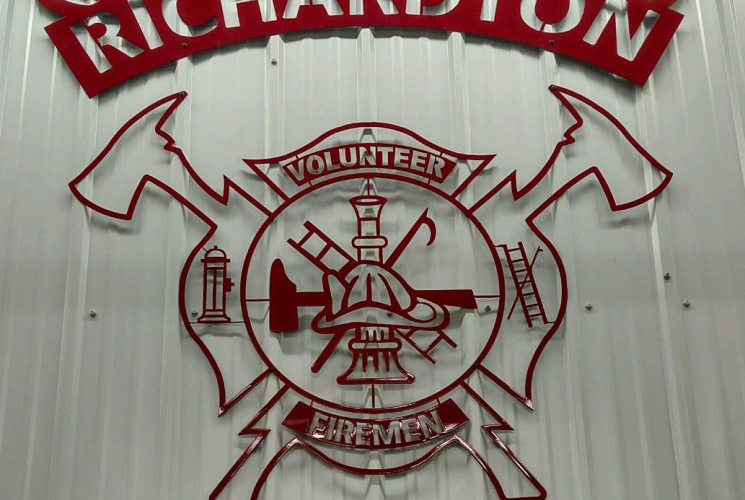 Strong winds and dry conditions fueled a grass fire that burned 880 acres north of Richardton on Monday, injuring a firefighter and a rancher’s calves and damaging electrical infrastructure.

Visibility in the area was near zero at times Monday and caused one firefighting truck to roll off the side of the road, Richardton Fire Chief Jason Kostelecky said.

One of the firefighters inside sought medical help for injuries suffered in the crash, but his scans did not indicate serious problems, said the chief of the all-volunteer fire department. The vehicle, a pickup with a pumping unit, was damaged but some components might be salvaged.

The fire also harmed some calves in the area, but Kostelecky was unsure of the extent of their injuries.

Wind gusts Monday surpassed 50 mph throughout western North Dakota. A number of agencies from the surrounding area assisted the Richardton Fire Department as it sought to contain the spread in the southern part of Dunn County.
“We try To get as many resources on-scene as we can,” Kostelecky said of fighting fires in high winds. “There were farmers with discs trying to work up the ground ahead of the fire, trying to create fire breaks. That is really, truly what stopped this.”
The fire reached a harvested corn field, which also helped to slow down the spread, he said.
An abandoned building burned in the blaze, as did fences, power lines and utility poles. The fire did not result in any power outages, but it damaged five Montana-Dakota Utilities structures, causing one to collapse, company spokesman Mark Hanson said.
A non-MDU power line knocked down by the wind started the fire, Kostelecky said.

Firefighters managed to get the blaze under control around sunset Monday and continued to monitor the area Tuesday. Some trees were still smoldering Tuesday afternoon, as well as manure piles and fence posts.

Kostelecky said many farmers and ranchers helped out, whether by pulling out their tractors to help stop the fire or by supplying food and water to firefighters.

“We can’t do it without any of them,” he said. “It takes a whole community coming together.”

Weather conditions have been ripe for wildfires in western North Dakota in recent days, with low humidity and strong winds. The highest wind gust in the region Monday was 79 mph in Mott, according to the National Weather Service.

A high wind warning was in effect for the entire state on Tuesday, with gusts expected to hit or exceed 50 mph.

The weather service also posted a red flag warning for the southwestern part of the state, for “critical fire weather conditions” stretching roughly from northwest of Dickinson to Sioux County south of the Bismarck-Mandan area.

Other fires were reported Monday and Tuesday near Minot, McVille in Nelson County and on the Spirit Lake Reservation in northeast North Dakota.

More than one-fourth of North Dakota is in extreme drought, according to the latest U.S. Drought Monitor Map. Most of the rest of the state is in severe drought, with the southeastern corner in moderate drought. No areas are yet in exceptional drought, the worst category.

The weather service forecast shows no chance of precipitation in the state through Saturday.
https://bismarcktribune.com/news/state-and-regional/fire-near-richardton-burns-880-acres-firefighter-calves-injured/article_37d750ca-c4c1-5a8d-8940-362a89dab198.html?fbclid=IwAR0OYN9WauRGMt8yA2so7YUSuWQrSzkUa4tiaFZ5wrRJduzeIFDSXcsqXFY